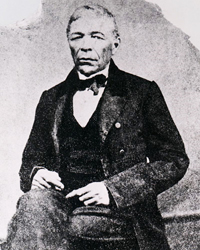 William de Fleurville (also known as “Florville”) was a Haitian-born businessman who met Mr. Lincoln in New Salem in 1831. After Mr. Lincoln helped him attract clients in that community, Fleurville moved to Springfield where he eventually opened barbershop across from the State House and served as Mr. Lincoln’s barber for 24 years. One White House employee, “Aunt Rosetta” Wells, recalled that back in Illinois there had been a black “man who used to cut Lincoln’s hair off, and beat him telling fish stories and knew more jokes than you could shake a stick at. He had a shop for the boys to hang around and listen to ‘Old Abe’ tell jokes. This man was honest too, and he saved his pennies to make dollars.”1 Fleurville had moved from the Carribean to Baltimore around 1820, where he met future Lincoln friend Dr. Elias H. Merriman. He then relocated to New Orleans before he went to Illinois to reconnect with Merriman, who helped set him up in the barber business and attract a clientele.

According to Lincoln scholar Lloyd Ostendorf, “A local newspaper editor claimed only two men in Springfield understood Lincoln, his law partner William H. Herndon, and his barber, William Florville.”2 Historian Benjamin Quarles noted: “Fleurville’s shop was the informal social center for the men of the community; it was ‘Lincoln’s second home,’ before his marriage in 1842. Frequently he would leave his law books there; he would have nobody in Springfield shave him except Billy.”3 On one occasion Billy nursed Lincoln back to health. Sometime before Mr. Lincoln was married to Mary Todd he was taken quite ill and was staying at Dr. Anson G. Henry’s home in Springfield. The doctor sent for Fleurville to have him stay for a time with his patient and administer the medicine he had prescribed for him. Lincoln scholar Lloyd Ostendorf wrote that when Lincoln married shortly thereafter, Fleurville “had the pleasant task of giving the prospective [bridegroom] Lincoln his special dollar shave for his wedding day.”4

About 10 days after his recovery Lincoln came into Florville’s barber shop and said, ‘Billy, I want you to shave me, and trim my hair also, and I want you to do it as if I was going to be married.’

Billy replied, ‘If I do, Mr. Lincoln, it will cost you one dollar. We have to charge extra for shaving when they are going to be married.’

‘All right,’ replied Mr. Lincoln. ‘I suppose I ought not to dance without paying the fiddler!’5

At one point, Billy also lived near Lincoln. Lincoln scholar Richard E. Hart noted: “By late-twentieth-century standards, the Lincolns lived in an integrated neighborhood. In 1860, there were at least twenty-one African Americans, approximately 10 percent of Springfield’s African American population, living within a three-block radius of the Lincoln home. Lincoln certainly knew of the day-to-day life of Springfield slaves, indentured servants, and free African Americans.”6 Among the African-American personal acquaintances of Lincoln whom Hart cites were Fleurville, minister Henry Brown, future White House aide William John, Mary and John Shelby and Maria Vance.7 They were a diverse group who came together, according to Richard Hart to recognize the 1834 anniversary of emancipation of British slaves in the West Indies.

Fleurville was an accomplished musician who wrote poetry to promote his business: “Billy will always be found on the spot, With razor keen and water smoking hot…” On another occasion, he appealed to the vanity of politicians for business in a published advertisement: “Times are pregnant with important events. Among them, and not the least is the approaching election. I am personally friendly to all the candidates. No one of them has any reason to fear any opposition. I shall exert myself to secure the election of them all. To effect this object, I would say to them that nothing is so necessary as to have a smooth face. I am adept in making smooth faces. My terms are moderate. I shall rise in price on some after the election.”8 As a clarinetist and flutist, Florville was active in a local military band. Historian Gossie Harold Hudson wrote: “Billy was looked upon as one of Springfield’s leading Blacks. He headed a movement to have established, according to an 1855 law, a school supported by taxes imposed on colored citizens, and paid for the advertisement for a schoolmaster. Although a Catholic, he contributed generously to the charities of various religious groups.”9

Mr. Lincoln handled Fleurville’s legal affairs and was his attorney in a legal title case. He wrote Charles R. Welles in 1852: “I am in a little trouble here. I am trying to get a decree for our ‘Billy the Barber’ for the conveyance of certain town lots sold to him by Allen, Gridly and Prickett. I made you a party, as administrator of Prickett, but the Clerk omitted to put your name in the writ, and so you are not served. Billy will blame me, if I do not get the thing fixed up this time. If, therefore, you will be so kind as to sign the authority below, and send it to me by return mail, I shall be greatly obliged, and will be careful that you shall not be involved, or your rights invaded by it.”10

The Bloomington lots continued to cause Mr. Lincoln some aggravation – through his own negligence. Shortly before he left Springfield for his Cooper Union speech in February 1860, Mr. Lincoln asked a friend to handle the problem: “William Florville, a colored barber here, owns four lots in Bloomington, on which I have been paying the taxes for him several years, but which I forgot [to] do, though under promise, when I was at Bloomington last. Will you please collect the ten dollars fee we spoke of, add enough of your own money, pay all taxes due, and send me the receipt, or receipts? If you will I shall be great obliged; and besides, will return you the money you advance by the first mail.”11 Gossie Harold Hudson noted: “A shrewd businessman himself, Florville made even greater economic advancement as a result of Lincoln’s patronage. He acquired substantial land holdings, and he established the first clothes cleaning establishment in Springfield.”12

President Lincoln came to rely on Fleurville in other ways. According to Gossie Harold Hudson, “When Lincoln left Springfield for Washington, Billy agreed to take care of the president’s property, a promise when he faithfully kept.”13 He wrote President Lincoln to assure his sons that their dog Fido was healthy and happy. Fleurville wrote President an encouraging letter in late December 1863 after Mr. Lincoln had recovered from a bout of variloid – believing “it might not be improper for one so humbler in life and occupation to address the President of the United States –

Yet, I do so, feeling that if it is received by you (and you have time for I know you are heavily Tax) it will be read with pleasure as a communication from Billy the barber, this I express and Feel, for the truly great Man regards with corresponding favor the poor, and down troden [sic] of the Nation, to those who are favored in Color, position, and Franchise rights. And this you have Shown, and I and my people feel greatful to you for it. The Shackels have fallen, and Bondmen have become freeman to Some extent already under your Proclamation. And I hope ere long, it may be universal in all the Slave States. That your Authority May Soon extend over them all, to all the oppressed, releiving [sic] then from their Bondage, and cruel Masters; Who make them work, and fight, against the Goverment [sic]. And when So released, the would be glad I have no doubt, to assist in putting down this infamous Rebellion – May God grant you health, and Strength, and wisdom, so to do, and so to act, as Shall redown to his Glory, and the Good, peace, prosperity, Freedom, and hapiness [sic] of this Nation. So what War Shall be known no more, that the cause or pretext for war be removed, that Rebellion and Secession Shall have no place to make, and nothing to ask for, that all the States may not have an equal right to demand, then, and not till then, will the Government be Steadfast and abiding, and for that reason, I hope and trust, that you have be chosen for a Second term to administer the affairs of this Government. I think, after a four years experiance [sic], you are posted in matters relating thereto. and better calculated to carry out your own designs, and the wishes of the people, than any other man in this Nation. And the people here so think…the nation will rejoice, the oppressed will shout the name of their deliverer, and generations to come will rise up and call you blessed.”

And if it Shall be the wish of the Men, who Support the Goverment, anxious to put down the Rebellion, Sustaining the Army, loving Freedom and the union, and who Sustain your acts, and your Administration, that you Should again accept the office of Chief Magistrate of this Nation, I hope you will not decline: but accept it, and put things and Matters through, to their termination[.] And When these troubles Shall end, the Nation will rejoice. The Oppressed will Shout the name of their deliverer, and Generations to Come, will rise up and call you blessed. (So mote it be) I was Sorry to hear of your illness, and was glad When I learned that your health was improving. I hope by this time, you are able or soon will be, to attend to your arduous buisness[.]

After some personal news, Florville concluded his letter by saying: “please accept my best wishes for yourself and family, and my daily desires for yourself that your Administration may be prosperous, Wise, and productive of Good results to this nation, and may the time Soon come, When the Rebellion Shall be put down; and Traitors, receive their just recompence of reward, and the People be at Peace, is the Sincere feelings of your obt. Servant.”14