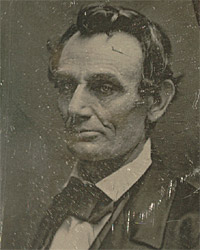 When Mr. Lincoln served in the Illinois Legislature, wrote contemporary biographer Josiah G. Holland, “The agitation of the slavery question was just beginning to create uneasiness among slaveholders and politicians; and during the winter the subject was broached in the legislature. Resolutions were introduced of an extreme pro-slavery character, and the attempt was made to fix the stigma of abolitionism upon all who did not indorse them. They were carried through by the large democratic majority, and the opposition to them was weak in numbers and weaker still in its positions. We can judge something of its weakness when we learn that only two men among all the whig members were found willing to subscribe to a protest against these resolutions..”1

Lincoln chronicler Herbert Mitgang wrote: “When Lincoln was twenty-eight years of age and a representative in the Illinois General Assembly, resolutions were passed by the strongly pro-Southern legislators saying that ‘the right of property in slaves, is sacred to the slave-holding states by the Federal Constitution, and that they cannot be deprived of that right without their consent.'”2 According to Lincoln biographers John G. Nicolay and John Hay, as anti-slavery agitation increased in the East and “people with uneasy consciences continued to write and talk and petition Congress against slavery,…most of the State legislatures began to pass resolutions denouncing them. In the last days of 1836 Governor Duncan sent to the Illinois Legislature the reports and resolutions of several States in relation to this subject. They were referred to a committee, who in due time reported a set of resolves” denouncing abolition. “A long and dragging debate ensued of which no record has been preserved; the resolutions, after numberless amendments had been voted upon, were finally passed, in the Senate, unanimously, in the House with none but Lincoln and five others in the negative.”3 The original anti-abolition resolution, which passed the House on January 20 and the Illinois Senate a few days later, read:

Resolved by the General Assembly of the State of Illinois, That we highly disapprove of the formation of abolition societies, and of the doctrines promulgated by them.

Resolved, That the right of property in slaves, is sacred to the slave-holding States by the Federal Constitution, and that they cannot be deprived of that right without their consent.

Resolved, That the General Government cannot abolish slavery in the District of Columbia, against the consent of the citizens of said District without a manifest breach of good faith.

“Resolved, That the Governor be requested to transmit to the States of Virginia, Alabama, Mississippi, New York, and Connecticut, a copy of the foregoing report and resolutions.”4

Mr. Lincoln had tried unsuccessfully to amend the resolution. Lincoln chronicler Paul Simon wrote: “He moved to insert after the word ‘Congress’ the words, ‘unless the people of the said District petition for the same.’ At twenty-seven, Lincoln proposed an amendment aimed at clearing a path for making the District of Columbia free territory. His motion failed without a roll call, probably overwhelmingly; if there had been support for his position, a roll call would have been requested. Another amendment was attempted to call Congressional action on slavery ‘unconstitutional’ instead of ‘unwise.’ Lincoln voted with the overwhelming majority to reject the motion. Illinois was not willing to follow the most extreme of the proslavery forces.5

Contemporary biographer William H Herndon, who served as Mr. Lincoln’s law partner for nearly two decades, wrote of abolitionism: “It is not surprising, I think that Lincoln should have viewed this New England importation with mingled suspicion and alarm. Abstractly, and from the standpoint of conscience, he abhored slavery. But born in Kentucky, and surrounded as he was by slave-holding influences, absorbing their prejudices and following in their line of thought, it is not strange, I repeat, that he should fail to estimate properly the righteous indignation and unrestrained zeal of a Yankee Abolitionist. On the last day but one of the session, he solicited his colleagues to sign with him a mild and carefully worded protest against the following resolutions on the subject of domestic slavery, which had been passed by both houses of the Legislature in answer to the Southern protests.”6

The following protest was presented to the House, which was read and ordered to be spread on the journals, to wit:

‘Resolutions upon the subject of domestic slavery having passed both branches of the General Assembly at its present session, the undersigned hereby protest against the passage of the same.

They believe that the institution of slavery is founded on both injustice and bad policy; but that the promulgation of abolition doctrines tends rather to increase than to abate its evils.

They believe that the Congress of the United States has no power, under the constitution, to interfere with the institution of slavery in the different states.

They believe that the Congress of the United States has the power, under the Constitution to abolish slavery in the District of Columbia; but that that power ought not to be exercised unless at the request of the people of said District.

The difference between these opinions and those contained in the said resolutions, is their reason for entering this protest.7

Herndon observed: “This document so adroitly drawn and worded, this protest pruned of any offensive allusions, and cautiously framed so as to suit the temper of the times, stripped of its verbal foliage reveals in naked grandeur the solemn truth that the institution of slavery is founded on both injustice and bad policy.’ A quarter of a century later finds one of these protesters righting the injustice and correcting the bad policy of the inhuman and diabolical institution.”8

“The protest is mild enough,” noted historian Harry V. Jaffa. “The crucial difference without question, was the insistence that slavery itself was unjust. Even here there is more of a shift of emphasis than a break with the majority. For the joint select committee which had reported the resolutions, even while denouncing abolitionism in unmeasured terms, had deeply deplored ‘the unfortunate condition of our fellow-men, whose lots are cast in thraldom in a land of liberty and peace.”9 .

Contemporary biographer William H. Herndon wrote that although Mr. Lincoln apparently sought other supporters, only Dan Stone was willing to join with Mr. Lincoln in the protest. Stone was a fellow Whig attorney from Springfield who went on to become a judge in northern Illinois and Ohio. The two Sangamon County representatives apparently waited until after the Legislature decided on critical legislation to move the state capital from Vandalia to their home town of Springfield before introducing their controversial paper.

Herndon wrote: “That language and sentiment are clearly Lincolnian, and over twenty years afterward, when it was charged that Lincoln was an abolitionist, and this protest was cited as proof, it was only necessary to call for a careful reading of the paper for an unqualified and overwhelming refutation of the charge.”10 Historian Paul Simon wrote: “What motivated Lincoln and Stone to file the protest is not clear. It probably was a desire to go on record firmly against slavery. It may have been a desire to make clear to their constituents that in voting against the earlier resolution they were not aligning themselves with the Abolitionists – whom neither favored at this time; siding openly with the Abolitionists would have been political suicide, and future opponents might interpret their earlier votes on the resolution that way.”11

Historian Douglas Wilson maintained that the Lincoln-Stone protest was less than it appeared: “Although the joint protest states forthrightly that the protesters ‘believe that the institution of slavery is founded on both injustice and bad policy,’ it was almost certainly not an attempt to put them on record as two lonely voices crying out in the wilderness against the evils of slavery. The crux of the matter was apparently something else, even though, unfortunately, it is not possible to say with precision what that something else was.”12

Biographer Wilson wrote: “The meager record of the debate on the resolution makes it impossible to determine exactly what their objections were, but their protest makes it clear that they did not disagree with the leading propositions…having to do with abolitionists and the property rights of slaveholders. A defeated amendment offered by Lincoln suggests that his opposition may have been tied to a side issue, having to do with whether and how the United States Congress might deal with slavery in the District of Columbia.”13

Wilson suggested that the Lincoln-Stone actions reflected their political pragmatism. “Sangamon was populated mostly by Kentuckians and immigrants from other slave states, and while a great many of these disliked slavery, they had no use for abolitionists, who seemed to them to be offensive agitators who presumed to claim divine authority for their views, who meddled publicly in the private affairs of others, and who set themselves above the Constitution.” According to Wilson, “The expedient chosen by Lincoln and Stone to protect themselves from future attack was shrewdly simple and effective. They prepared a statement of protest that, at the very end of the session, could be placed on the record without comment or debate.”14 The protest itself served as a cover for the clause that “the promulgation of abolition doctrines tends rather to increase than to abate its evils.”

Mr. Lincoln appears to be taking a cautiously anti-slavery position – consistent with his other legislative activity at the time. “As a young legislator, Lincoln reflected majority opinion in opposing African American suffrage,” wrote historian Kenneth J. Winkle. “During his first term, he voted for a resolution ‘that the elective franchise should be kept pure from contamination by the admission of colored votes.”15 Lincoln chronicler Paul Simon wrote: “When Lincoln announced his candidacy for state representative for his second term, he stated in the second paragraph of that announcement that he favored ‘admitting all whites to the right of suffrage.’ Here he added that he favored giving women the right to vote. Possibly Lincoln took this stand against Negroes voting because one of his legislative colleagues, William Carpenter, was receiving public criticism for suggesting that free Negroes should be permitted to vote.”16

The amendment and protest were not the only occasions in which Representative Lincoln had to deal with slavery in the Legislature. “During each session the slavery matter often came up incidentally. School funds, for example, were specified in the law to be distributed on the basis of the white population rather than the total population. This never became a matter of debate. On these matters Lincoln voted on the basis of the central issue rather than the racially restrictive clause. Even if his opinion was contrary to the racial clause, it would not have been possible to eliminate it,” wrote Lincoln chronicler Paul Simon. “Only exception to this appears in his third term. He was in all likelihood present for roll calls and simply refrained from voting on the phrase that limited school funds to white children.”17

Although the general tone of legislation regarding Illinois blacks was negative and restrictive, there was an exception. Paul Simon wrote: “During Lincoln’s final session a bill passed, introduced by Lyman Trumbull of Belleville – eventually one of the nation’s leaders in the United States Senate – which made it easier for a Negro to establish his status as a free citizen. Surprisingly, no roll call was needed on this measure, and it slipped through easily; many of the members did not understand its significance. Helping to get the measure through was the final sentence that ‘nothing herein contained shall be construed to bar the lawful claim of any person or persons to any such negro or mulatto.'”18