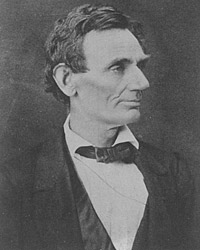 At the time the constitution of the United States was adopted it was expected that the slave trade would be abolished. I should assert, and insist upon that, if Judge Douglas denied it. But I know that it was equally expected that slavery would be excluded from the territories and I can show by history, that in regard to these two things, public opinion was exactly alike, while in regard to positive action, there was more done in the Ordinance of ’87, to resist the spread of slavery than was ever done to abolish the foreign slave trade. Lest I be misunderstood, I say again that at the time of the formation of the constitution, public expectation was that the slave trade would be abolished, but no more so than the spread of slavery in the territories should be restrained. They stand alike, except that in the Ordinance of ’87 there was a mark left by public opinion showing that it was more committed against the spread of slavery in the territories than against the foreign slave trade.

Compromise! What word of compromise was there about it. Why the public sense was then in favor of the abolition of the slave trade; but there was at the time a very great commercial interest involved in it and extensive capital in that branch of trade. There were doubtless the incipient stages of improvement in the South in the way of farming, dependent on the slave trade, and they made a proposition to the Congress to abolish the trade after allowing it twenty years, a sufficient time for the capital and commerce engaged in it to be transferred to other channels. They made no provision that it should be abolished [in?] twenty years; I do not doubt that they expected it would be; but they made no bargain about it. The public sentiment left no doubt in the minds of any that it would be done away. I repeat there is nothing in the history of those time, in favor of that matter being a compromise of the Constitution. It was the public expectation at the time, manifested in a thousand ways, that the spread of slavery should also be restricted.

Then I say if this principle is established, that there is no wrong in slavery, and whoever wants it has a right to have it, is a matter of dollars and cents, a sort of question as to how they shall deal with brutes, that between us and the negro here there is no sort of question, but that at the South the question is between the negro and the crocodile. That is all. It is a mere matter of policy; there is a perfect right according to interest to do just as you please – when this is done, where this doctrine prevails, the miners and sappers will have formed public opinion for the slave trade. They will be ready for Jeff. Davis and Stephens and other leaders of that company, to sound the bugle for the revival of the slave trade, for the second Dred Scott decision, for the flood of slavery to be poured over the free States, while we shall be here tied down and helpless and run over like sheep.

It is to be a part and parcel of this same idea, to say to men who want to adhere to the Democratic party, who have always belonged to that party, and are only looking about for some excuse to stick to it, but nevertheless hate slavery, that Douglas’ Popular Sovereignty is as good a way as any to oppose slavery. They allow themselves to be persuaded easily in accordance with their previous dispositions, into this belief, that it is about as good a way of opposing slavery as any, and we can do that without straining our old party ties or breaking up old political associations. We can do so without being called negro worshippers. We can do that without being subjected to the jibes and sneers that are so readily thrown out in place of argument where no argument can be found; so let us stick to this Popular Sovereignty – this insidious Popular Sovereignty. Now let me call your attention to one thing that has really happened, which shows this gradual and steady debauching of public opinion, this course of preparation for the revival of the slave trade, for the territorial slave code, and the new Dred Scott decision that is to carry slavery into the free States. Did you ever five years ago, hear of anybody in the world saying that the negro had no share in the Declaration of National Independence; that it did not mean negroes at all; and when ‘all men’ were spoken of negroes were not included?

I am satisfied that five years ago that proposition was not put upon paper by any living being anywhere. I have been unable at any time to find a man in an audience who would declare that he had ever known any body saying so five years ago. But last year there was not a Douglas popular sovereign in Illinois who did not say it. Is there one in Ohio but declares his firm belief that the Declaration of Independence did not mean negroes at all? I do not know how this is; I have not been here much; but I presume you are very much alike everywhere. Then I suppose that all now express the belief that the Declaration of Independence never did mean negroes. I call upon one of them to say that he said it five years ago.

If you think that now, and did not think it then, the next thing that strikes me is to remark that there has been a change wrought in you (laughter and applause), and a very significant change it is, being no less than changing the negro, in your estimation, from the rank of a man to that of a brute. They are taking him down, and placing him, when spoken of, among reptiles and crocodiles, as Judge Douglas himself expresses it.

Is not this change wrought in your minds a very important change? Public opinion in this country is everything. In a nation likes ours this popular sovereignty and squatter sovereignty have already wrought a change in the public mind to the extent I have stated. There is no man in this crowd who can contradict it.

Now, if you are opposed to slavery honestly, as much as anybody I ask you to note that fact, and the like of which is to follow, to be plastered on, layer after layer, until very soon you are prepared to deal with the negro everywhere as with the brute. If public sentiment has not been debauched already to this point, a new turn of the screw in that direction in all that is wanting; and this is constantly being done by the teachers of this insidious popular sovereignty. You need but one or two turns further until your minds, now ripening under these teachings will be ready for all these things, and you will receive and support, or submit to, the slave trade; revived with all its horrors; a slave code enforced in our territories; and a new Dred Scott decision to bring slavery upon into the very heart of the free North. This, I must say, is by carrying out those words prophetically spoken by Mr. Clay, many, many years ago. I believe more than thirty years when he told an audience that if they would repress all tendencies to liberty and ultimate emancipation, they must go back to the era of our independence and muzzle the cannon which thundered its annual joyous return on the Fourth of July; they must blow out the moral lights around us; they must penetrate the human soul and eradicate the love of liberty; but until they did these things, and others eloquently enumerated by him, they could not repress all tendencies to ultimate emancipation.

I ask attention to the fact that in a pre-eminent degree these popular sovereigns are at this work; blowing out the moral lights around us; teaching that the negro is no longer a man but a brute; that the Declaration has nothing to do with him; that he ranks with the crocodile and the reptile; that man, with body and soul, is a matter of dollars and cents. I suggest to this portion of the Ohio Republicans, or Democrats if there be any present, the serious consideration of this fact, that there is now going on among you a steady process of debauching public opinion on this subject. With this my friends, I bid you adieu.1