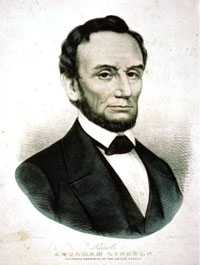 Abraham Lincoln and Cabinet in Council 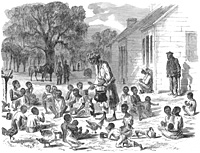 Children being fed at Hilton Head, South Carolina, who are under the military authorities

Mr. Lincoln had the reins of government but in the early days of the Civil War, he did not hold those reins tightly. Historian John Hope Franklin wrote that as President Lincoln “evolved his plan of emancipation, he was viewed all the more unfavorably because he felt it necessary to restrain enthusiastic officers who emancipated slaves without his authorization. In 1861 General John C. Frémont proclaimed military emancipation in Missouri, but Lincoln had to modify his action in keeping with the [First] Confiscation Act.”1

Historian Allen C. Guelzo wrote by June 1862, President Lincoln knew he “could not forever hold off [David] Hunter and Fremont and [Ulysses S.] Grant from taking the steps they needed to take for victory; either they would act or he would act, and once they did he would have to support them and the ball would be rolling toward a general emancipation whether the border states liked it or not. He also could not hold off the impatient Radicals of his own party. Illinois’s congressional odd-fellows, Isaac Arnold, the renegade Democrat, and Owen Lovejoy, the evangelical Radical, put up a bill to abolish slavery in the territories which finally passed the House on June 19th, over more tears and anguish from the border-staters.”2

Historian Robert Morse explained the history of Arnold’s 1862 legislation: “On March 24, Mr. Arnold, of Illinois, introduced a bill ambitiously purporting ‘to render freedom national and slavery sectional.’ It prohibited slavery wherever Congress could do so, that is to say, in all Territories, present and future, in all forts, arsenals, dockyards, etc., in all vessels on the high seas and on all national highways beyond the territory and jurisdiction of the several States. Both by its title and by its substance it went to the uttermost edge of the Constitution and, in the matter of Territories, perhaps beyond that edge. Mr. Arnold himself supported it with the bold avowal that slavery was in deadly hostility to the national government, and therefore must be destroyed. Upon a measure so significant, and so defended, debate waxed hot, so that one gentleman proposed that the bill should be sent back to the Committee with instructions not to report it back ‘until the cold weather.’ The irritation and alarm of the Border States rendered modification necessary unless tact and caution were to be wholly thrown to the winds. Ultimately, therefore, the offensive title was exchanged for the simple one of ‘An Act to secure freedom to all persons within the Territories of the United States,’ and the bill curtailed to accord with this expression, became law by approval of the President on June 19.”3

First, Mr. Lincoln restrained efforts by Union commanders Frémont and Hunter to use emancipate slaves and recruit black soldiers. With the issuance of the draft Emancipation in September 1862, Mr. Lincoln began a steady move to employ blacks in the military efforts to crush the rebellion. By the end of the war, about 180,000 black men had put on the uniforms of Union soldiers. Having employed blacks in the war to preserve the Union, Mr. Lincoln felt obligated to preserve their freedom. After a meeting with Kentucky Governor Thomas E. Bramlette and Senator James Dixon. President Lincoln wrote:

You ask me to put in writing the substance of what I verbally said the other day, in your presence, to Governor Bramlette and Senator Dixon. It was about as follows:

“I am naturally anti-slavery. If slavery is not wrong, nothing is wrong. I can not remember when I did not so think, and feel. And yet I have never understood that the Presidency conferred upon me an unrestricted right to act officially upon this judgment and feeling. It was in the oath I took that I would, to be the best of my ability, preserve, protect, and defend the Constitution of the United States. I could not take the office without taking the oath. Nor was it my view that I might take an oath to get power, and break the oath in using the power. I understood, too, that in ordinary civil administration this oath even forbade me to practically indulge my primary abstract judgement on the moral question of slavery. I had publicly declared this many times, and in many ways. And I aver that, to this day, I have done no official act in mere deference to my abstract judgment and feeling on slavery. I did understand however, that my oath to preserve the constitution to the best of my ability, imposed upon me the duty of preserving, by every indispensable means, that government – that nation – of which that constitution was the organic law. Was it possible to lose the nation, and yet preserve the constitution? By general law life and limb must be protected; yet often a limb must be amputated to save a life; but a life is never wisely given to save a limb. I felt that measures, otherwise unconstitutional, might become lawful, by becoming indispensable to the preservation of the constitution, through the preservation of the nation. Right or wrong, I assumed this ground, and now avow it. I could not feel that, to the best of my ability, I had even tried to preserve the constitution, if, to save slavery, or any minor matter, I should permit the wreck of government, country, and Constitution all together. When, early in the war, Gen. [John C.] Fremont attempted military emancipation, I forbade it, because I did not then think it an indispensable necessity. When a little later, Gen. [Simon] Cameron, then Secretary of War, suggested the arming of the blacks, I objected, because I did not yet think it an indispensable necessity. When, still later, Gen.[David] Hunter attempted military emancipation, I again forbade it, because I did not yet think the indispensable necessity had come. When, in March, and May, and July 1862 I made earnest, and successive appeals to the border states to favor compensated emancipation, I believed the indispensable necessity for military emancipation, and arming the blacks would come, unless averted by that measure. They declined the proposition; and I was, in my best judgment, driven to the alternative of either surrendering the Union, and with it, the Constitution, or of laying strong hand upon the colored element. I chose the latter. In choosing it, I hoped for greater gain than loss; but of this, I was not entirely confident. More than a year of trial now shows no loss by it in our foreign relations, none in our home popular sentiment, none in our white military force, – no loss by it any how or any where. On the contrary, it shows a gain of quite a hundred and thirty thousand soldiers, seamen and laborers. These are palpable facts, about which, as facts, there can be no caviling. We have the men; and we could not have had them without the measure.

[“] And now let any Union man who complains of the measure, test himself by writing down in one line that he is for subduing the rebellion by force of arms; and in the next, that he is for taking these hundred and thirty thousand men from the Union side, and placing them where they would be but for the measure he condemns. If he can not face his case so stated, it is only because he can not face the truth.[“]

I add a word which was not in the verbal conversation. In telling this tale I attempt no compliment to my own sagacity. I claim not to have controlled events, but confess plainly that events have controlled me. Now, at the end of three years struggle the nation’s condition is not what either party, or any man devised, or expected, God alone can claim it. Whither it is tending seems plain. If God now wills the removal of a great wrong, and wills also that we of the North as well as you of the South, shall pay fairly for our complicity in that wrong, impartial history will find therein new cause to attest and revere the justice and goodness of God.4