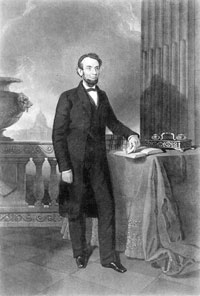 Camp arrival under the Proclamation

President Lincoln was clear that there were measures he could constitutionally take as the Union’s commander-in-chief that could not constitutionally be taken by Congress. His actions on emancipation were motivated by “military necessity.” Nearly a year after he first proposed military emancipation, President Lincoln wrote a public letter to a meeting to be held for Union supporters on September 3, 1863 in Springfield, Illinois. In this so-called “Conkling letter,” President Lincoln wrote: “The most that can be said, if so much, is that slaves are property. Is there, has there ever been, any question that by the law of war, property, both of enemies and friends, may be taken when need.”1

President Lincoln was relying on constitutional precedent. Historian James M. McPherson wrote: “Slave labor was so important in Confederate armies as well as on the home front that the government impressed slaves into service before it began drafting white men as slaves worked as army laborers, teamsters, cooks, musicians, servants, and in other support capacities. They provided much of the logistical ‘tail’ of these armies (functions initially performed by white soldiers and civilians in Union armies) and thereby freed a high proportion of the Confederate soldiers for combat duty.”2

Historian LaWanda Cox wrote: “In March 1862 Lincoln’s special message to Congress had linked emancipation in the loyal border states to the war effort; by July he had decided to use a proclamation of emancipation for the secession states as an instrument of war. When in that month Louisiana Unionists complained that the actions of the military were undermining slavery, his irritation was barely disguised. It was all their own fault, he countered; they had only ‘to take place in the Union upon the old terms,’ but if they did not act promptly ‘should they not receive harder blows rather than lighter ones?’ And they should consider ‘whether they have not already had time enough to do this.’ The sooner Louisiana took her place in the Union, ‘the smaller will be the amount of that which will be past mending’ but there were ‘already broken eggs’ which could not be mended. When a conflict developed between Benjamin Butler, the general then commanding at New Orleans, and his abolitionist subordinate, John W. Phelps, over the latter’s policy welcoming black refugees from slavery into Union lines, and using them as soldiers (policies abhorrent to loyal planters), Lincoln discreetly but effectively supported Phelps position. Butler received first a cautiously phrased directive from Secretary of War Stanton on behalf of the president, then more explicit but less official prodding through Secretary Chase. In short, before Lincoln issued the final Emancipation Proclamation of January 1, 1863, he may have been prepared to welcome back a secession state without emancipation as a precondition, but clearly he was not extending himself to preserve the institution of slavery in interest of reunion. What should not be ‘past mending” in 1862 may have appeared to Lincoln not slavery but only its immediate, uncompensated destruction.”3

“Professional opinion in the US Army provided the President with little clear guidance on the military utility or legitimacy of emancipation. By mid-1862, this opinion was deeply divided, often along political lines,” noted Burrus M. Carnahan. “If professional opinion was divided on the legitimacy of emancipation as a war measure, the wartime practice of other nations provided surprisingly clearer guidance. For well over a century and a half prior to 1862, emancipating (and arming) an enemy’s slaves had become an acceptable means of warfare between slaveholding European societies.”4

Lincoln biographers John G. Nicolay and John Hay wrote: “Admitting the general principle of international law, of the right of a belligerent to appropriate or destroy enemies’ property, and applying it to the constitutional domestic war to suppress rebellion which he was then prosecuting, there came next the question of how his military decree of enfranchisement was practically to be applied. This point, though not fully discussed, is sufficiently indicated in several extracts. In the draft of a letter to Charles D. Robinson he wrote, August 17, 1864: ‘The way these measures were to help the cause was not be by magic or miracles, by inducing the colored people to come bodily over from the rebel side to ours.’ And in his letter to James C. Conkling of August 26, 1863, he says: ‘But negroes, like other people, act upon motives. Why should they do anything for us if we will do nothing for them? If they stake their lives for us, they must be prompted by the strongest motive, even the promise of freedom. And the promise, being made, must be kept.'”5

“Even military history included one incident of military emancipation prior to the Civil War. During the 1830s the Seminole Wars in Florida were known as the graveyard of American military reputations. Operating in small bands in thickly forested swamps, the guerrilla tactics of the forested swamps, the guerrilla tactics of the Seminoles were highly effective against the regular officers and soldiers of the US Army. Zachary Taylor was one of the few generals to fight them with a measure of success,” wrote Burrus M. Carnahan. Taylor refused to reunite with their old masters the slaves who were captured with the Seminole guerillas – insisting instead in deporting them with the Seminoles to the Indian Territory that is now Oklahoma.6

According to Carnahan, “As a legal proposition, Taylor’s policy had important implications for the legitimacy of Lincoln’s Emancipation Proclamation. General Taylor and the War Department were in effect asserting that he rules of international law of war could affect private property rights established by state law, even if the ‘war’ was an internal conflict rather than an international one. (The United States government, of course, never recognized the Seminoles, or any band of hostile Indians, as a foreign enemy; legally they were always rebels against Federal authority, just like the Confederates.)”7

When President Lincoln acted, he acted in consonance with the doctrine of military necessity. Historian Allan Nevins wrote: “Lincoln’s sagacity did not fail him in the form of the document. It was an exercise of war powers; its main intent was not the liberation of a race (though he was fully conscious of this aspect) but the furtherance of the war effort and the preservation of the Union; and he did well to couch it in cold legal phraseology, direct and deadly as a bullet. [Charles] Sumner and [Horace] Greeley regretted the absence of rhetorical flourishes; ‘a poor document, but a mighty act,’ was John A. Andrew’s verdict. But its moral import spoke for itself, and Lincoln, as [James Russell] Lowell remarked in the Atlantic, would have weakened it by an attempt at misplaced eloquence.”8

Ralph R. Fahrney, biographer of Tribune editor Horace Greeley, wrote that the doctrine of military necessity was strong supported by Greeley: “In every phase of the emancipation propaganda, whether the government was being urged to a more advanced position concerning the status of slavery, or public opinion was being aroused to the acceptance and espousal of partial or complete liberation of the slaves, Tribune readers faced the argument of the military necessity in all its various ramifications. All ‘abstract considerations’ were put aside. Others might set forth the undeniable facts concerning the wrongfulness of the accursed institution, but slavery ‘as an element of power’ in the tremendous struggle which threatened the life of the nation merited first consideration. In order to end the war for the Union speedily and triumphantly, the North should not hesitate to utilize the ‘readiest and most efficient means’ at hand. If the President would see fit to advise the South that the Federal government would henceforth refuse to recognize slaveholding by rebels, the Union commanders would at once witness ‘a general stampede of slaves from all the districts within fifty miles of any Union force’ directly to their camps. And such an additional array of man power, if properly utilized, would prove of inestimable value to the Northern cause.”9 Lincoln biographers Nicolay and Hay laid out the case for military necessity as President Lincoln saw it and they observed it as his aides in the White House:

The actual tangible military result which he declares was his constitutional and legal warrant for his edict of military emancipation is set forth in the following extracts. Whether we judge it by the narrow technical rules of applied jurisprudence, or by the broader principles of the legal philosophy of Christian nations, it forms equally his complete vindication. In the draft of a letter to Isaac M. Schermerhorn he wrote, September 12, 1864: ‘Any different policy in regard to the colored man deprives us of his help, and this is more than we can bear. We cannot spare the hundred and forty or fifty thousand now serving us as soldiers, seamen and laborers, This is not a question of sentiment or taste, but one of physical force, which may be measured and estimated as horse power and steam power are measure and estimated. Keep it, and you can save the Union. Throw it away, and the Union goes with it.”

And in the one already quoted, to Robinson, August 17, 1864: ‘Drive back to the support of the rebellion the physical force which the colored people now give and promise us, and neither the present nor any coming Administration can save the Union. Take from us and give to the enemy the hundred and thirty, forty, or fifty thousand colored persons now serving us as soldiers, seamen, and laborers and we cannot longer maintain the contest.

So also in an interview with John T. Mills he said: ‘But no human power can subdue this rebellion without the use of the emancipation policy and every other policy calculated to weaken the moral and physical calculated to weaken the moral and physical forces of the rebellion. Freedom has given us 200,000 men, raised on Southern soil. It will give us more yet. Just so much it has subtracted from the enemy…Let my enemies prove to the country that the destruction of slavery is not necessary to a restoration of the Union; I will abide issue.'”

President Lincoln’s biographers, John G. Nicolay and John Hay, had a front row seat to their boss’s thinking on emancipation. They wrote:

In these extracts we have the President’s outline explanation of the legal validity of the proclamation. Like all his reasoning, it is simple and strong, resting its authority on the war powers of the government and its justification upon military necessity. As to the minor subtleties of interpretation or comment which it might provoke from lawyers or judges after the war should be ended, we may infer that he had his opinions, but that they did not enter into his motives of action. On subsequent occasions, while continuing to declare his belief that the proclamation was valid in law, he nevertheless frankly admitted that what the courts might ultimately decide was beyond his knowledge as well as beyond his control.

For the moment he was dealing with two mighty forces of national destiny, civil war and public opinion; forces which paid little heed to theories of public, constitutional, or international law where they contravened their will and power. In fact it was the impotence of legislative machinery, and the insufficiency of legal dicta to govern or terminate the conflicts of public opinion on this identical question of slavery, which brought on civil strife. In the South slavery had taken up arms to assert its nationality and perpetuity; in the North freedom had risen first in mere defensive resistance; then the varying fortunes of war had rendered the combat implacable and mortal. It was not from the moldering volumes of ancient precedents, but from the issues of the present wager of battle, that future judges of courts would draw their doctrines to interpret to posterity whether the Edict of Freedom was void or valid.10