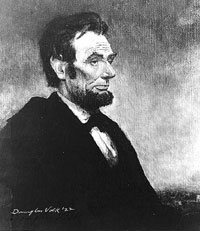 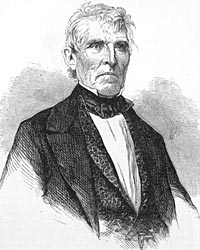 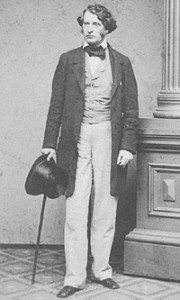 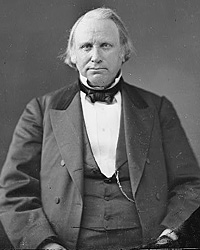 From the beginning of the Civil War, President Lincoln came under considerable pressure from Radical Republicans to take action to free slaves in areas in rebellion against the Federal government. Mr. Lincoln doubted the constitutionality of such plans and sought instead to implement compromise plans for compensated emancipation and colonization. Historian Allen C. Guelzo wrote: “At the very opening of Congress in December, 1861, Massachusetts senator Henry Wilson immediately proposed a compensated emancipation bill for the District of Columbia to ‘strike [slavery] out from the national capital,’ with the striking cushioned by the Treasury’s paying slaveowners in the District an average of $300 a head for their slaves. Wilson and the Radicals rode down efforts by the border-state congressional delegations and by appalled Northern Democrats to make colonization of the District freed people mandatory and to force a referendum on emancipation among District residents (oddly enough, both of which had been provisions of Lincoln’s own unsubmitted District emancipation bill in 1849) and Lincoln signed it into law on April 16, 1862. He told Horace Greeley that the District emancipation bill had made him ‘a little uneasy’ for not including the referendum, ‘not that I would be glad to see it abolished, but as to the time and manner of doing it.’ The ideal emancipation bill would have ‘three main features – gradual – compensation – and vote of the people.'”1

Lincoln biographer Ida Tarbell wrote: “According to Charles Sumner, Mr. Lincoln had this plan of compensated emancipation well developed by December 1, 1861. The Senator reached Washington on that day, and went in the evening to call on the President. Together they talked over the annual message, which was to be sent to Congress on the 3d. Mr. Sumner was disappointed that it said nothing about emancipation. He had been speaking in Massachusetts on ‘Emancipation our Best Weapon,’ and he ardently desired that the President use the weapon. The President explained the plan he had developed, and Mr. Sumner urged that it be presented at once. Mr. Lincoln declined to agree to this, but as he rose say good-by to his visitor, he remarked:

“Well, Mr. Sumner, the only difference between you and me on this subject is difference of a month or six weeks in time.”

“Mr. President,” said Mr. Sumner, “if that is the only difference between us, I will not say another word to you about it till the long-set time you name has passed by.”

“Nor should I have done so,” continues Sumner in telling the story, “but about a fortnight after, when I was with him, he introduced the subject himself, asked my opinion on some details of his plan, and told me where it labored his mind. At that time he had the hope that some one of the Border States, Delaware, perhaps, if nothing better could be got, might be brought to make a proposition which could be made use of as the initiation to hitch the whole thing to. He was in correspondence with some persons at a distance with this view, but he did not consult a person in Washington, excepting Mr. [Salmon P.] Chase and Mr. [Montgomery] Blair, and myself, Seward knew nothing about it.”2

Mr. Lincoln had to juggle multiple constituencies and still honor the Constitution. His proposals therefore fell short of what abolitionists and Radical Republicans thought desirable and doable. Historian David Brion Davis wrote: “The various plans for gradual emancipation, including Lincoln’s, shared one striking characteristic. They really called for a prolongation of slavery or a slave-like condition of apprenticeship without providing for intermediate states of transition. Lincoln and other planners assumed that the most intelligent and capable slaves would win their freedom at an early stage, but no mechanisms were recommended to identify and protect this talented elite. The prevailing ideal of a laissez-faire meritocracy could never be reconciled with the tendency to think of slaves as an indivisible, corporate group.”3

President Lincoln’s actions during 1862 sought to slow the emancipation train but keep it on track. He tried to advocate compensated emancipation and colonization without ever developing widespread support in key constituencies necessary to implement these policies. “It soon became apparent that Congress would not settle for voluntary colonization and that it was afraid to proceed with emancipation,” wrote historian George H. Mayer. “In an effort to head off more extreme measures, Lincoln recommended compensated emancipation in a special message on March 6, 1862. This proposal was intended as an olive branch for both the radicals and the Border-state Unionists, but it satisfied neither. The radicals contended that Congress had the power to abolish slavery and denounced the President’s plan, which made compensated emancipation contingent on the consent of individual slaveholders. Border-state congressmen blindly resisted concessions. They echoed the aged [John] Crittenden, who asserted: “Let slavery alone. It will go out like a candle.'”4

Meanwhile, Mr. Lincoln sought to encourage interest in some colonization experiments. Historian Don E. Fehrenbacher wrote: “What surprises one the most about these activities is their petty scale. Lincoln implored the delegation of Washington Negroes to find him a hundred, or fifty, or even twenty-five families willing to emigrate. The Haitian project, if completely successful, would have accommodated just five thousand persons – about the number of Negroes born every two weeks in the United States. Back in 1854, Lincoln had admitted the impracticability of colonization as anything but a long-range program. Why, then, was he in such feverish haste to make a token beginning in 1862.”5

It took time for Mr. Lincoln to abandon these ideas. Historian John Hope Franklin wrote: “It is worth observing that there was no mention, in the final draft, of Lincoln’s pet schemes of compensation and colonization, which were in the Preliminary Proclamation of September 22, 1862. Perhaps Lincoln was about to give up on such impracticable propositions. In the Preliminary Proclamation, the President had said that he would declare slaves in designated territories ‘thenceforward, and forever free.’ In the final draft of January 1, 1863, he was content to say that they ‘are, and henceforward shall be free.’ Nothing had been said in the preliminary draft about the use of blacks as soldiers. In the summer of 1862 the Confiscation Act had authorized the President to use blacks in any way he saw fit, and there had been some limited use of them in noncombatant activities. In stating in the Proclamation that former slaves were to be received into the armed services, the President believed that he was using congressional authority to strike a mighty blow against the Confederacy.”6

Historian Don E. Fehrenbacher wrote of President Lincoln’s motivation: “One interesting answer emerges from the chronology. Most of the colonization flurry took place during the second half of 1862. After that, Lincoln’s interest waned, although according to the dubious testimony of Benjamin F. Butler, it revived near the end of the war. After issuing the Emancipation Proclamation on January 1, 1863, Lincoln, by all logic, should have pressed harder than ever for colonization, but he never made another public appeal on the subject. It appears that his spirited activity in the preceding six months may have been party of the process of conditioning the public mind for the day of jubilee. The promise of colonization had always been in part a means of quieting fears about the racial consequences of manumission. Offered as the ultimate solution to the problem of the black population, it could also serve as a psychological safety valve for the problem of white racism. This combination of purposes had inspired a number of Republican leaders to take up the cause of colonization in the late 1850’s. As one of them put it, the movement would ‘ward off the attacks made upon us about Negro equality.'”7